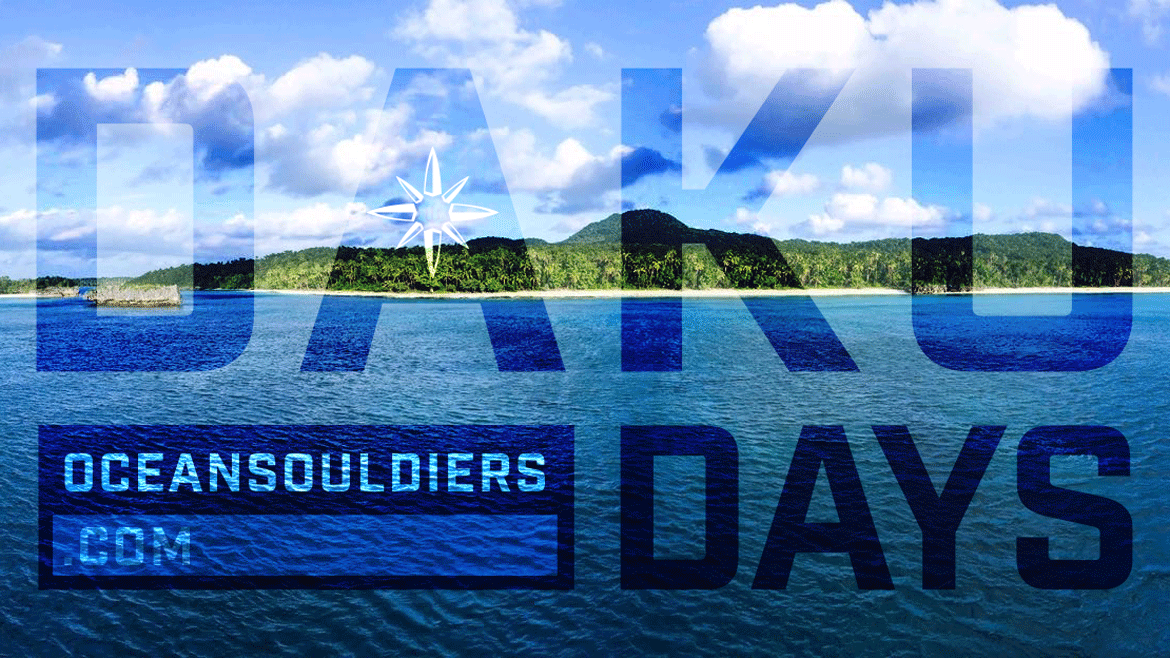 A REAL-LIFE ACCOUNT OF THE BUILD OF THE OCEANSOULDIERS PRISTINE SPORTFISHING CAMP ON YACATA ISLAND, FIJI AND THE ADVENTURES THAT ENSUE.

I remember the first time I saw a Kingfish. It was in a magazine or a fishing book when I was a about 12 years old and catching sand sharks was about all I did. I remember thinking to myself: “That's a stout looking fellow”, with that massive rounded forehead, big eyes and powerful jaws.

It was a large fish, about 20 kg, and the angler had a fly rod across his shoulders. I had no idea what a fly rod was at the time, it looked like a fancy version of a scarborough reel and a very long toothpick.

I subsequently saw pictures of big queenfish, big kob and other species too. The kingfish or giant trevally as I would later find out was still the most impressive fish I had seen. He looked like a brawler, the kind of drunken lout who was known all over town for being bad news. It would really be the prized jewel in the crown to catch one of those I thought.

My name is Nic Schwerdtfeger, I'm 30 years old, and currently sitting in the mess hall of a 75m government freight barge named “Brianna” with a group of hand poke tattooed men and stevedores in sleeveless shirts. Our current position is 17” 56' S , 179” 57' E, which if you don't have a chart of the Pacific ocean in front of you means that we are in Fijian waters. Leaving the main port from the capital city Suva and on our way to my home for the next few months. An island on the outer rim where I will be involved in building and providing the social media outlet for the OceanSouldiers Amanzi-Wai sport-fishing and surf retreat. I have so many questions, so many expectations, and quite frankly no real idea of what Im doing. This might be what will come to be known as: “ A long series of bad decisions that brought me to Fiji.” 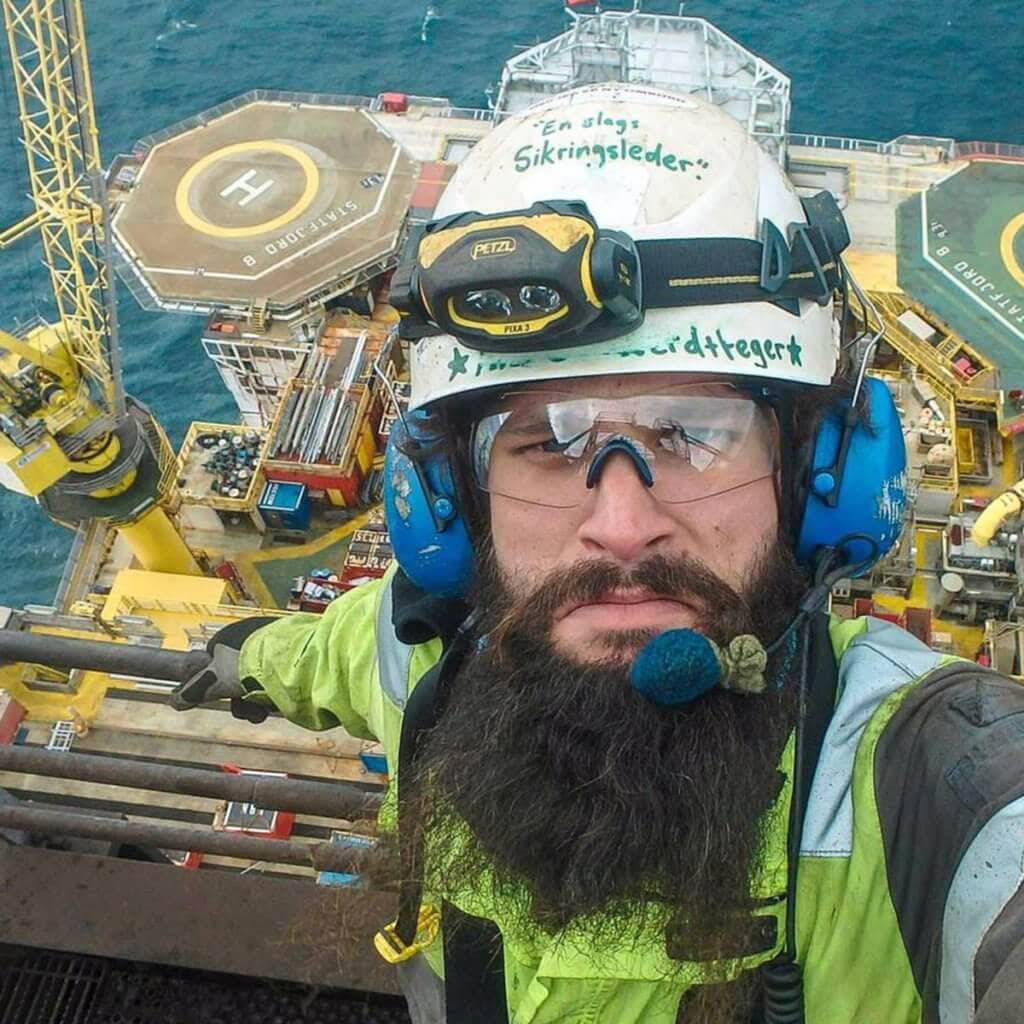 The names Nic, not Nick! A glimpse at my days on the rigs.

I have taken off my day job working in the oil and gas business in Norway and decided to go fishing. The opportunity came up when a friend and part of my fishing “family” Chad decided to go on a recce to Fiji, I saw some pictures of some fat coral trout, a Napoleon wrasse that could swallow an unsuspecting child whole and a few sizeable Giant Trevally's from that trip. I was excited for him. Catching fish is always rewarding, catching fish in a corner of the world after having travelled 3-4 days to catch, is something else altogether. Chad made a few trips back and forth with what has been undoubtedly a challenging frustrating and extremely rewarding process. Now the OceanSouldiers business, run by Chad and Ryan, has recently been granted rights on the island to begin building the camp. With all this knowledge and an opportunity to be part of the adventure, I had no choice but to go. 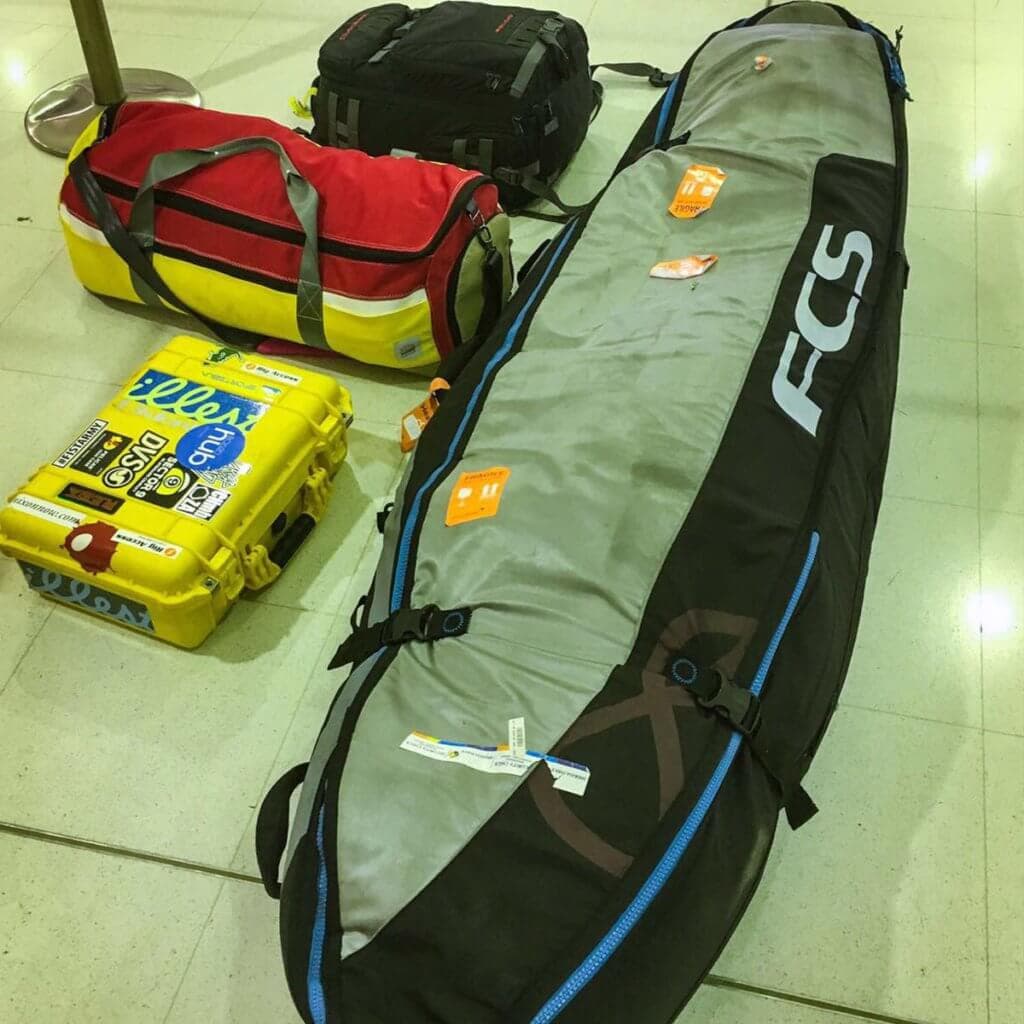 The coffin carrying it all. Camera Equipment, lots of fishing tackle, some clothes and i'm good to go.

Fiji? Fishing? Cloudbreak? Reefs? Coral? Warm blue water? Living in a tent? And for once going somewhere cool without having to take malaria medication? How could you not want to go and be involved with something like this? I had to find someway to give up these 'commitments' I had gotten myself into. Work, property woes, family, girlfriend..I had to solve and balance all of these things. As you can probably surmise, I got it right. As one of my rock climbing mentors says, “You win some, you lose some, you can never have it all”. I knew I was going to take a knock somewhere and I did, luckily it was the one that matters the least. Care to guess which one it was?

It's been a long journey, Norway, South Africa, Australia and now finally Fiji. I'm here, i'm ready and i'm amped. It feels like diving in the deep end. I have seen literally 10 pictures of the island and the setup. Coming in hot much? Anyway, ask me about how this ends up in a years time. 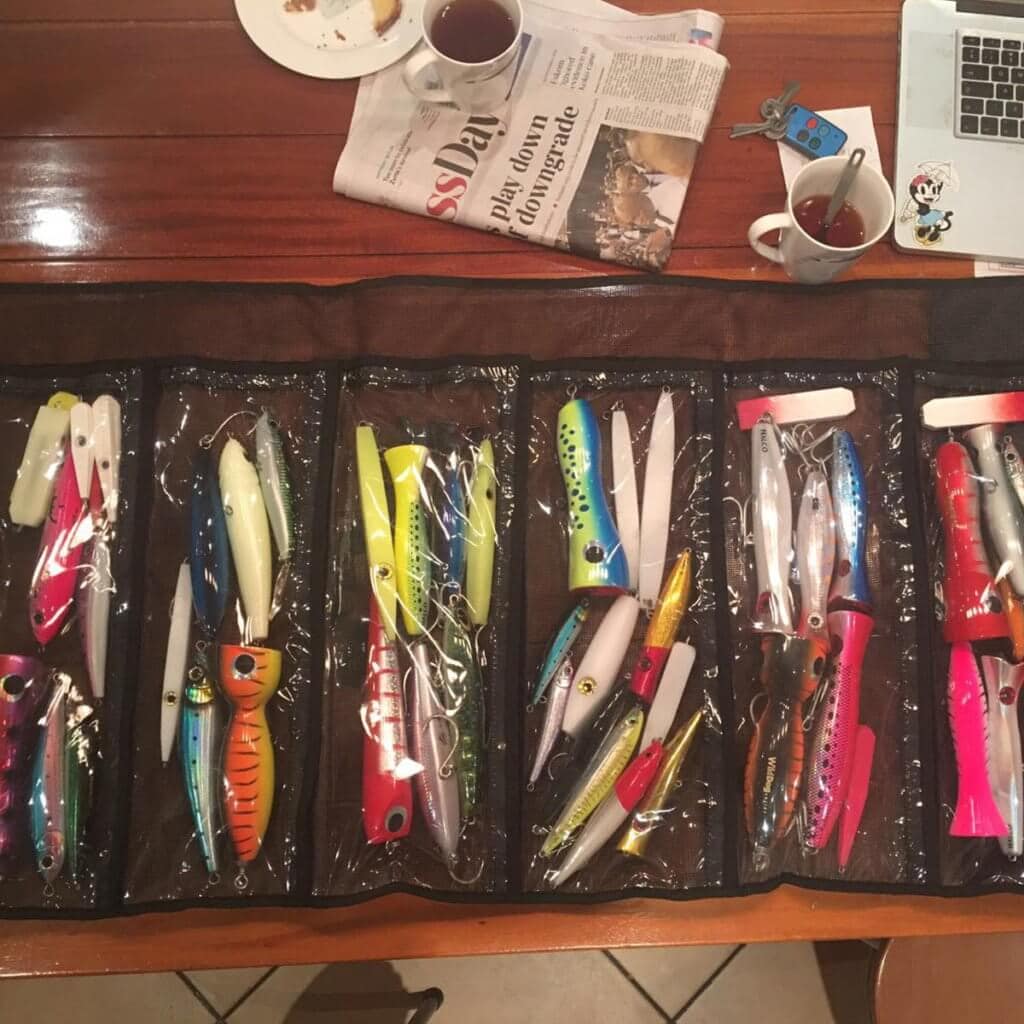 Enough poppers, stckbaits and topwater lures to keep me occupied for a while...

I have recently re-found my love for fly fishing. I have also recently befriended a few people that pretty much work to be able to fly fish. I also made the horrible mistake of watching a few fly fishing movies, namely “Waypoints” and “Providence”. My word what an amazing piece of film making Waypoints is, if you fish with any sort of rod, you need to watch that movie, it really is breath taking. It also showed me the diversity that can actually be achieved with a fly rod. This, along with having friends that were very good at twisting my arm, made sure I didn't really have much choice then when it came to packing gear and choosing what I would be taking along for the what is potentially going to be the fishing trip of a life time. I have a Plan A which involves targeting and landing as many species as possible on the fly, and Plan B which is exactly the same but on conventional tackle.

I'll give you a quick run down of the gear situation:

All of them are spooled and loaded correctly, from the Hatch Plus 9 with the Scientific Anglers Wavelength Titan floating line and 100lbs GatorBraid on backing to the little beach walking flick stick with 35lbs Gosen braid. Everything also pretty much has a back up spool. A few of the aforementioned items were graciously given/ loaned to me by fishing friends. Namely Brad Hall, and James Christmas. Thanks boys!

Lures and flies are taken care of in varieties and amounts that are worrying. You'll see the pics. I didn't skimp out here. 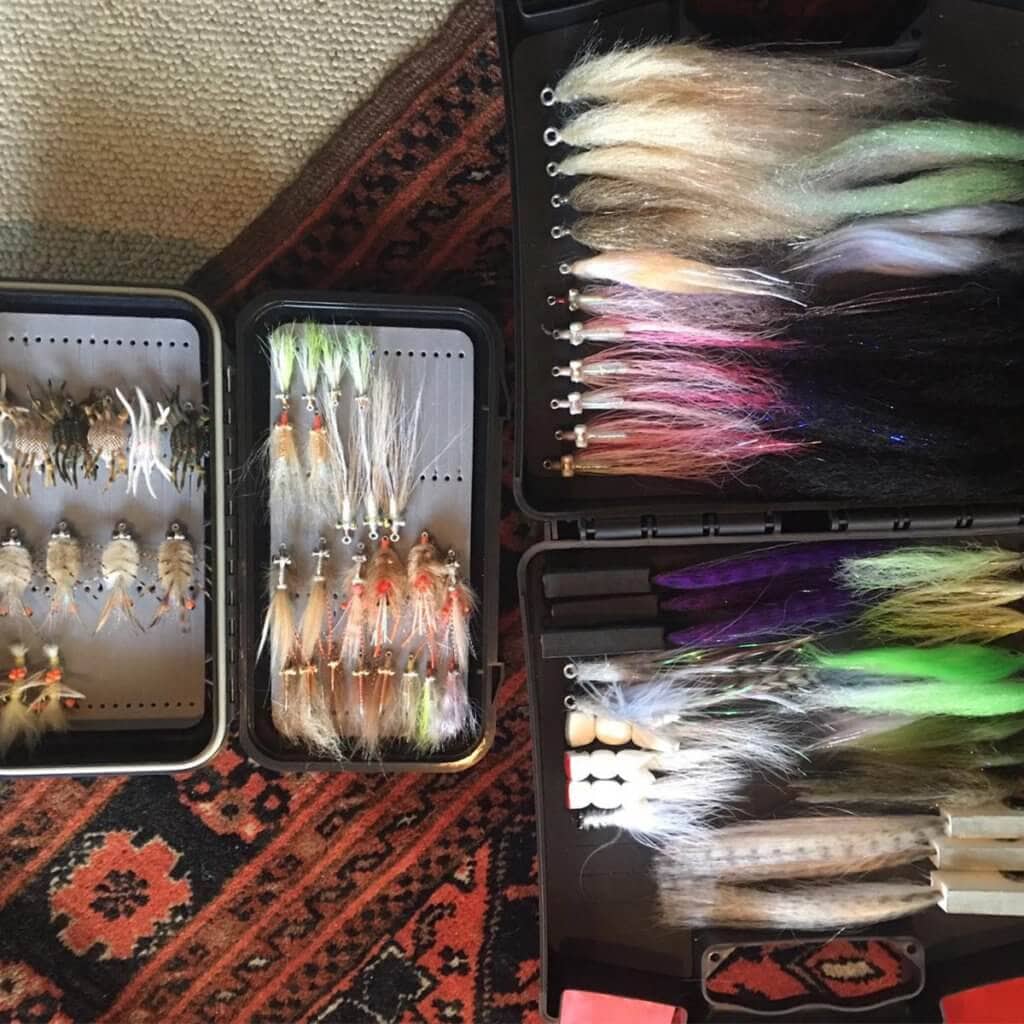 Locked and loaded with furry critters for the Fijian flats and some for dredging patterns included.

Aside from all of this, I have a surfboard, a bodyboard, (Im that guy...) some snorkeling gear, lots of suncream, a completely new DSLR system with and underwater housing I have never used before and some odds and ends to make life a bit more comfortable while living in a tent for 3 months.

Right, so now that we have gotten introductions out the way. An informal one at that. I guess I'll be your host for the next few weeks, months. Giving you an inside look into the process of what exactly we will be doing with regards to building a fishing camp in what is quite literally the middle of nowhere. Feel free to ask questions, send us chocolate, send us spools of braid, comment, share, like, don't like, whatever. 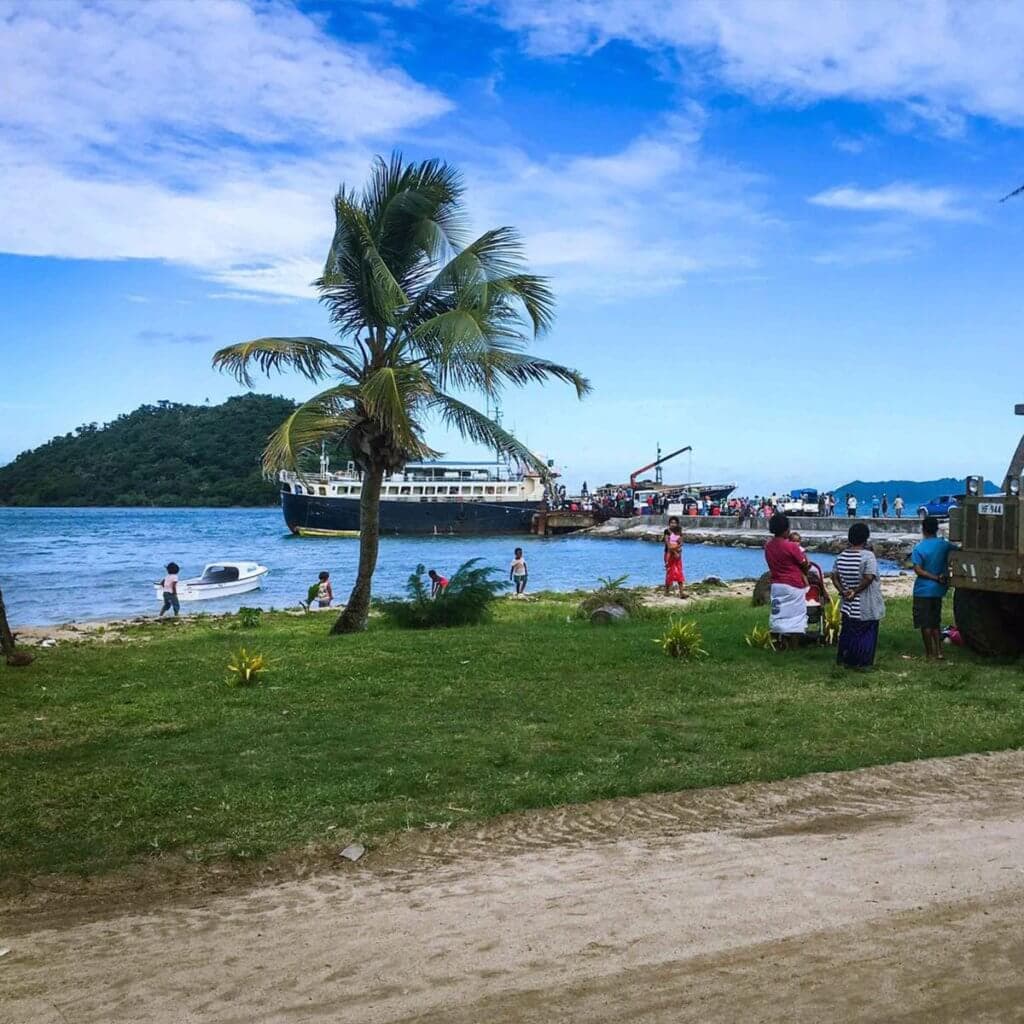 Where it all begins, the barge that carries all the supplies to all the remote islands in the Lau Group.

Im gonna grab some chow now, enjoy the warm wind blowing over the bow and listening to some more beats while I contemplate the next subject for the next piece. 36 Hours on the boat to go. I wonder which fly I'm gonna throw first at my prized jewel? ...