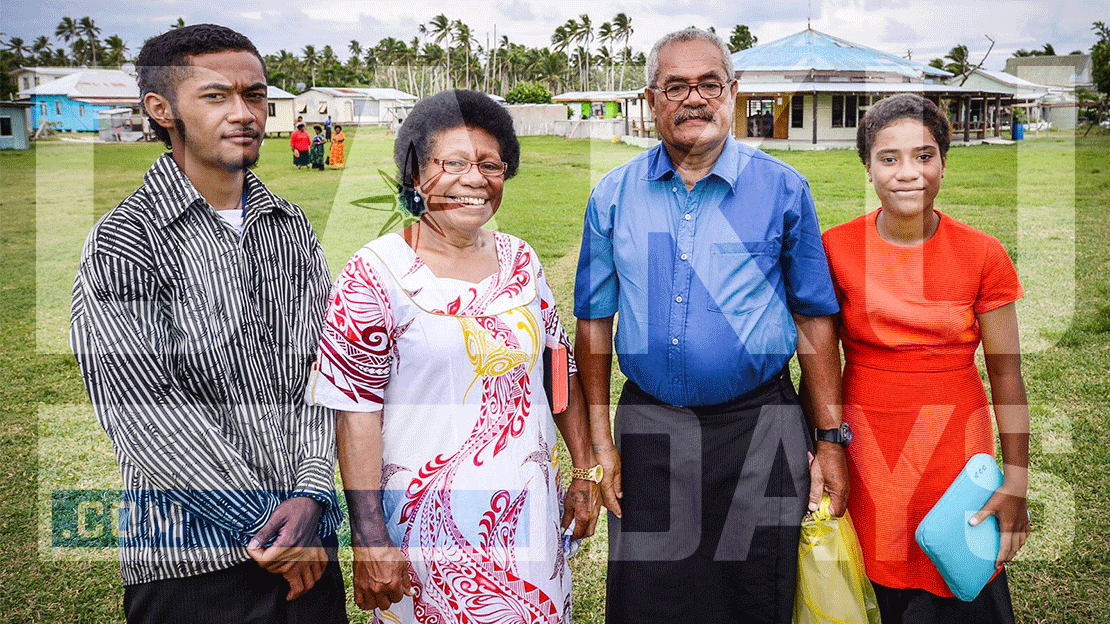 It sounds like a machine gun, or a string of firecrackers exploding in quick succession. Its a hard-to-describe sound, its equally hard to approximate how far off it is, but it catches my attention every time. Blue Mullet, a massive school of them, I guess 150-200 fish of 3-5kg size breaking the surface and jumping through the air in unison. It’s about 800m away past Bat Island, but the noise is so clear it could almost be across the garden. Big Eddie tells me they do it every day, either being chased or spooked by what I would guess is a larger Barracuda or GT.

Today we have to go to Yacata village on the other side of the island to make an offering to become one of the clan here. This grants us a citizenship of sorts that will allow us to swim, catch and eat fish, dive, eat coconuts and basically give us access to the island's natural resources. It's an extremely important part in the whole scheme of things and is our priority number 1 since coming. I had asked Tevita what would happen if we didn't make this offering, he replied with “ Something bad will happen, if maybe not the same day, then the next”. The look in his eye suggested that this was not a play play voodoo doll thing.

The offering process is called “Sevu-Sevu” and we will be giving a bunch of roots wrapped in newspaper from a special Fijian tree to the village chief in hope that he will grant us the privilege of being part of his tribe. He could also say no. But I have been assured that since Eddie Vulakoro, who was once the village headman himself is our connection, this won't happen. Would really suck if we had to pack up our things and head back to the airport. 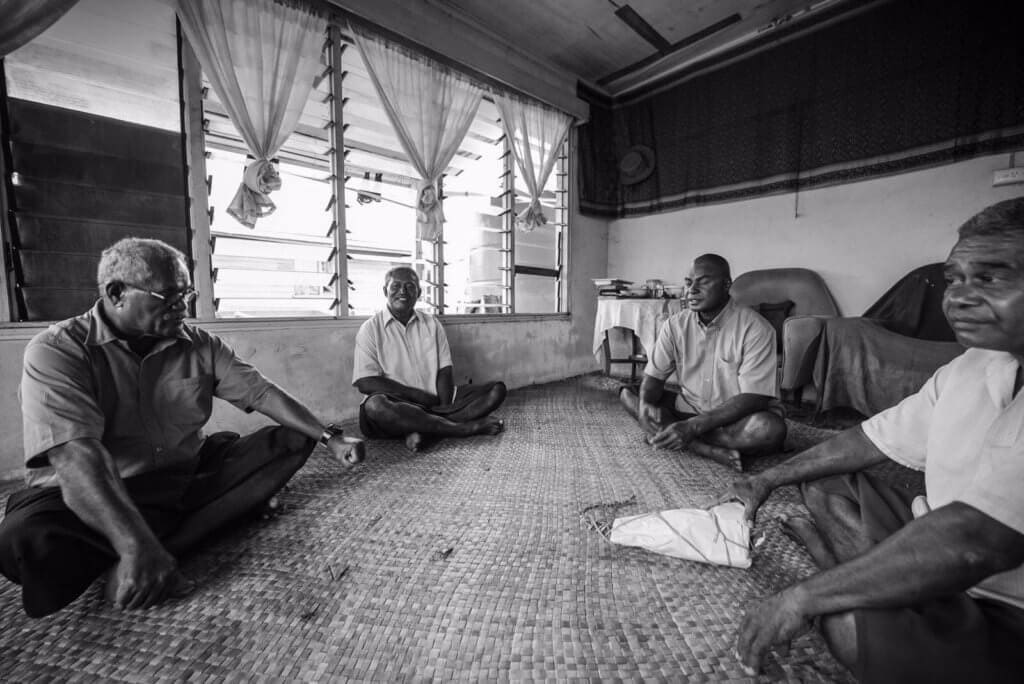 The Sevu-Sevu tradition being observed, meeting the boss man and delivering the root.

What does one wear to an occasion of this sort you might ask? Well, board shorts and yesterdays suncream aren't really gonna cut it, but I just so happened to bring my Armani 3- button suit for it. Not. There is a typical Fijian design shirt with tribal motif's called a “Bula shirt” that the boy's wear, and a kilt/sarong sort of thing called a “Sulu”. Tevita hooked me up on the mainland by taking me to a clothing store and wrapping me in Fiji's finest imported Pakistani cotton threads. Today I'm balling out in a slick all black pocket ‘sulu’ (it has pockets) and a bottle green and black bula shirt. Awwww yeeeeah!

The whole shabang should happen after the day's church service, since the head man and his crew are in church, we have to wait until they're done. It’s just after breakfast and the breeze coming from the east is most welcome. The humidity is no joke here. Just walking around and doing menial tasks is a chore when you're sweating bullets. I have take out my bedding to hopefully get rid of the moisture by putting it in the sun for a bit.

I’m sort of dreading going to church, partly in fear that my feet will spontaneously ignite should I step on Holy ground, and partly because I’m just not a church kind of person. I've always been more into spirituality and the concept of karma than a book and letting someone else decide what is wrong and right.

The boat ride is usually 10 minutes, but since today is Sunday and everyone is in their finest, we take it easy so as not to splash and get wet. It's a family affair; the whole gang is on board, Eddie, his wife, Eroni, Jiko, Edwina, Tevita, and the Danishes. Along the way we pass a rocky point and some grassy flats, a beach that looks like it has some good structure scattered in between bombies and finally the deeper channel that runs between Kaibu and Yacata. We spot 2 green turtles hovering and grazing. The lagoon and the way to the village look amazing in terms of fishing potential. Definitely a place we will be coming to drift and throw some flies some time soon. 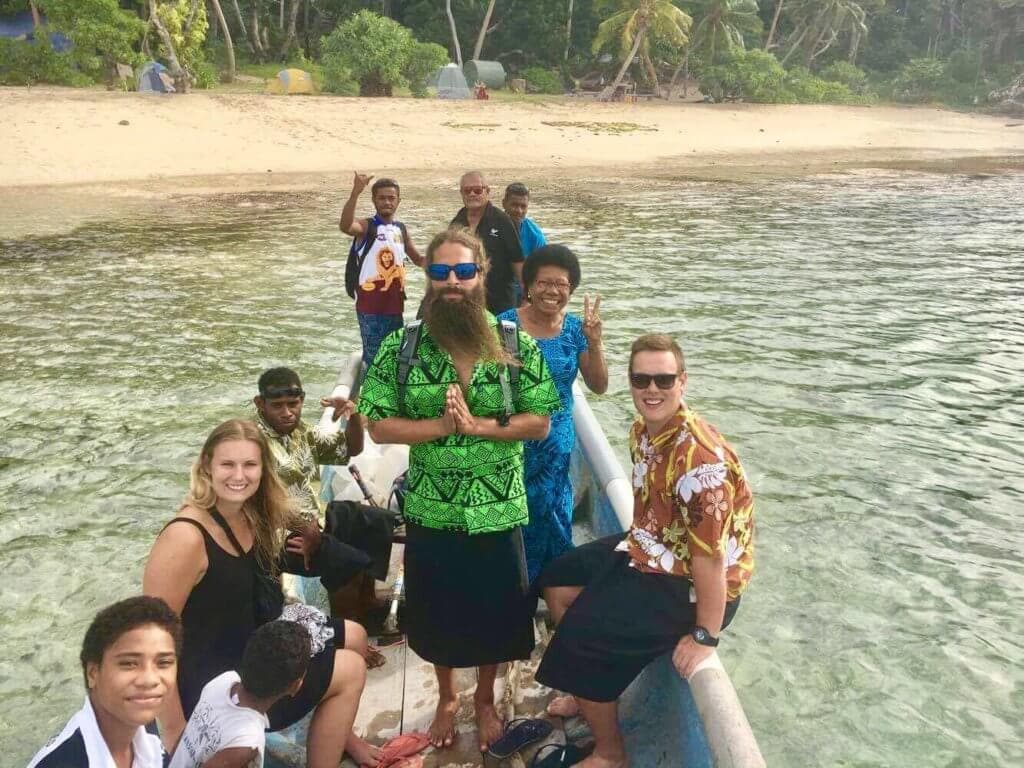 Bula shirt? Check. Pocket Sulu? Check. All in our Sunday finest and ready for the village.

Arriving in the village, it looks incomplete; everything is sort of unfinished, half painted, half built. Tatty I guess is the word. I don’t say anything, but then it hits me as to why. The cyclone. So cyclone Winston hit the Lau group last year and basically smashed Yacata a solid shot in the jaw. Winds of up to 160kmh tore down houses, wrecked the school, flattened storerooms, and basically wreaked havoc on the small village. Eddie points to where his house is/was (what’s left of it). It’s a shell; the husk of what would have been a very nice house. Fuck. I try envisioning what it must be like to be exposed and at the mercy of the elements like that. Scary. The waves and high sea level swamped a lot of the houses closest to the beach. One of Eddie's buddies was stranded at his house until the water receded. All in all, of the 41 structures that stood before Winston, less than half of them had their roofs still on after the catastrophe. A lot of people are still living in makeshift housing structures - tents, outstretched tarps and a few walls pinned together to form a dwelling. 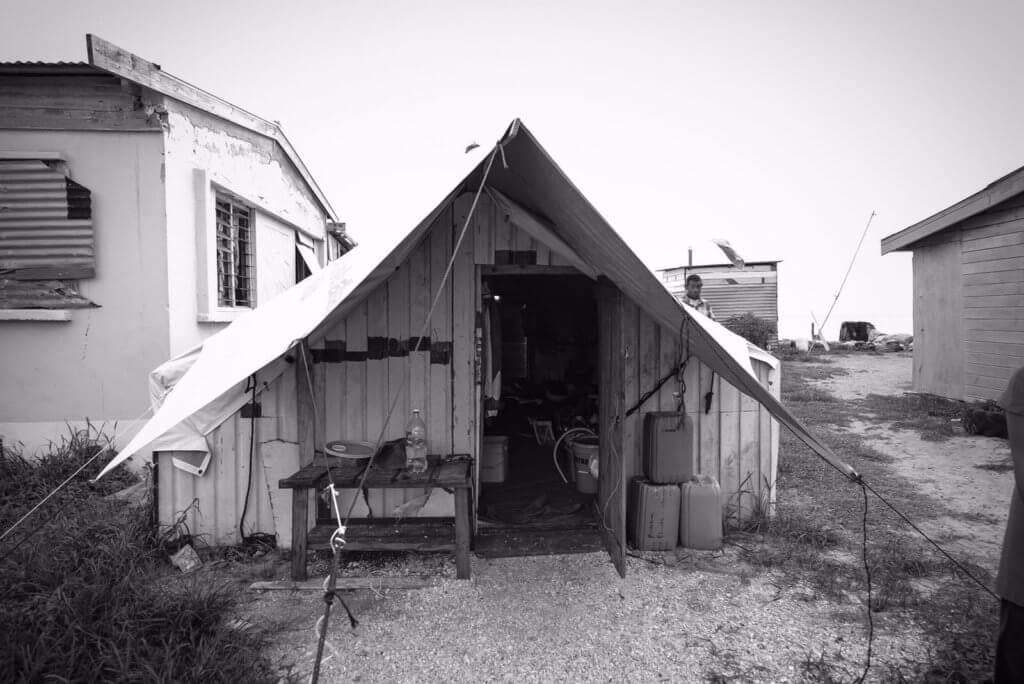 A make-shift house near the beach 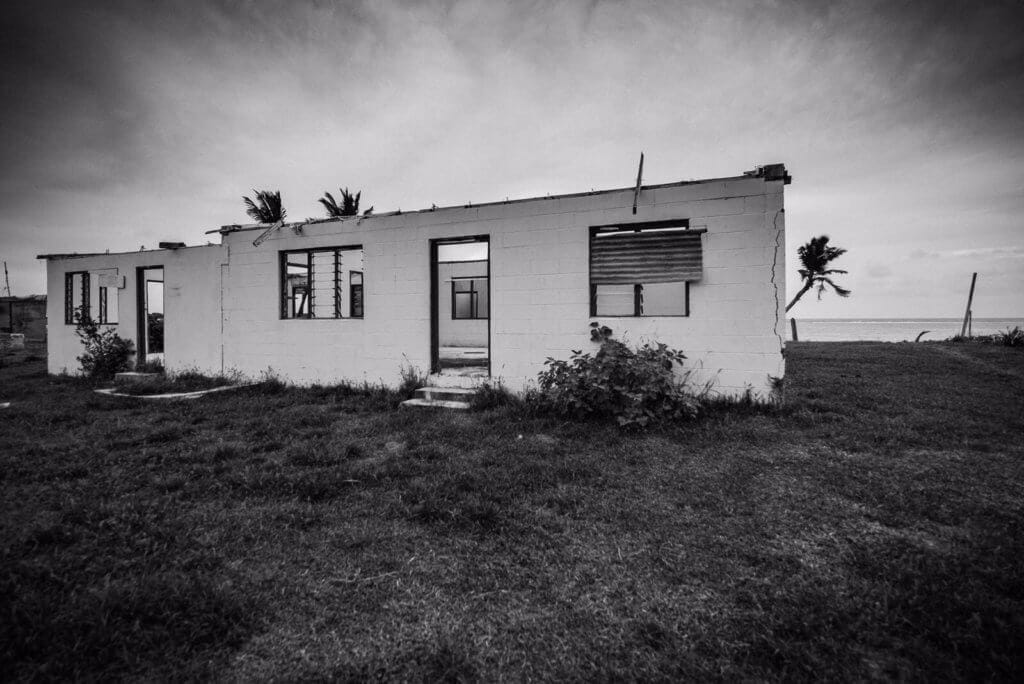 The aftermath of Winston

This doesn't change the spirit of the people though. Everyone is so warm and so happy to meet us; they are all very welcoming to us and smile at every given opportunity. The church is an octagonal shaped building in the middle of the village, outside there is a small roofed structure that houses the “lali” - a tree trunk shaped object that resonates like a bell. A tall man is beating it with two thick sticks to make a dull clinking sound. Eddie signals we should find some seats as the service will begin shortly. Basically I understood absolutely nothing of the next 1 1/2 hours of hymns, preaching and church stuff in Fijian. But the choir sang very well, I am fairly qualified to make this judgment as my mother sings in her church choir and I have been forced to listen to a choir piece from time to time. 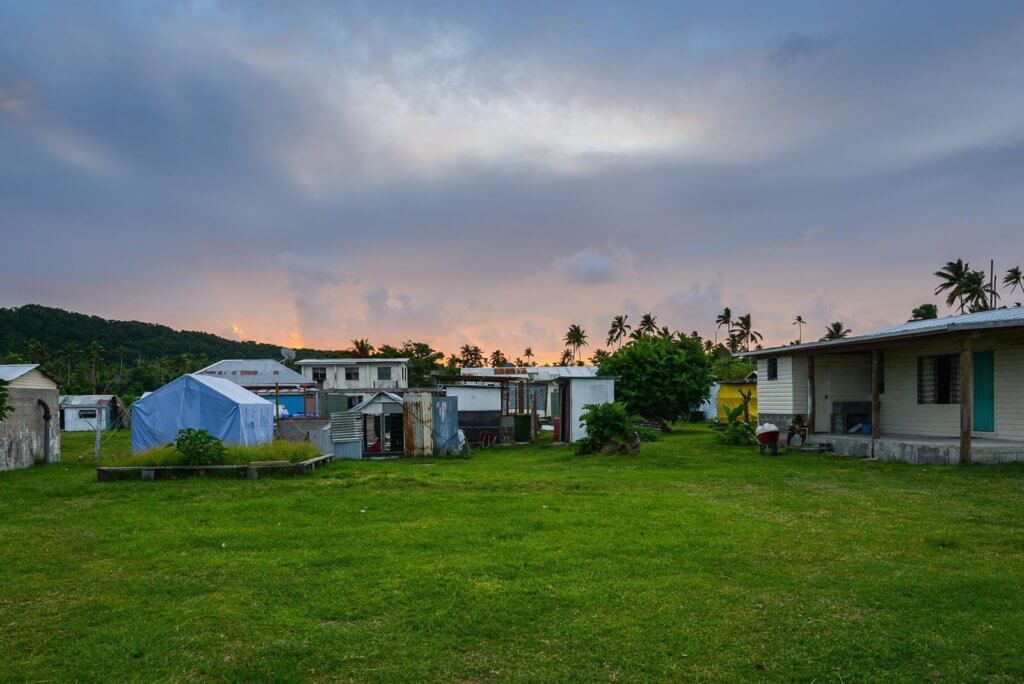 Sunset over the village. You can see a mix of rebuilt, partially destroyed and temporary houses.

Then comes the exciting part, after the service, we are led to Buli's house. Buli is the acting headman of the village, since El Padrino is back in Suva attending to some business. Buli has two sidekicks, an attaché if you will. We sit down on a woven mat on the floor, it’s a solemn atmosphere. I can sense the formality as nothing is said, its tense. Then finally Eddie says something. Eddie says a lot. It’s all in Fijian. Afterwards he explains to me that he has to present us since we are his guests, state our intentions and vouch for us that we aren't criminals. Eddie then hands over the parcel of magic roots. One of the sidekicks accepts and bows his head and prays for a bit. Then he speaks for a while, and from what my limited Fijian lets me understands, Eddie is saying thank you a number of times.  This is going well I think. Then Buli talks for a bit and looks at my worried face and my Danish companions. Then he smiles and says: “OK”. Eddie gives us a nod and says welcome. We are now free to fish, dive, swim, play in the sand and live peacefully on the island with his family. Pheeew. Stoked. We made it. Officially part of the clan now.

We shake hands afterwards and I thank Buli and his crew for welcoming us and tell them what an utterly breathtaking island they have. His face lights up.

That night we are invited to drink some grog with the local boys and our new family by the fireplace. I have heard about this stuff - both good and bad things. There is a whole process and a ritual behind it, it’s almost as sacred as the Sevu-Sevu process. So its starts with one dude pounding the Kava root into a powder in an oversized pestle and mortar setup, then they have to mix the powder with water in a net of sorts, that holds out the big bits you don't want in your teeth, then its mixed more and more in the big bowl until the other dude is happy with the shade of brown the water is. Then it has to be blessed. Some casual chanting and prayers and the grog is now fit for human consumption. 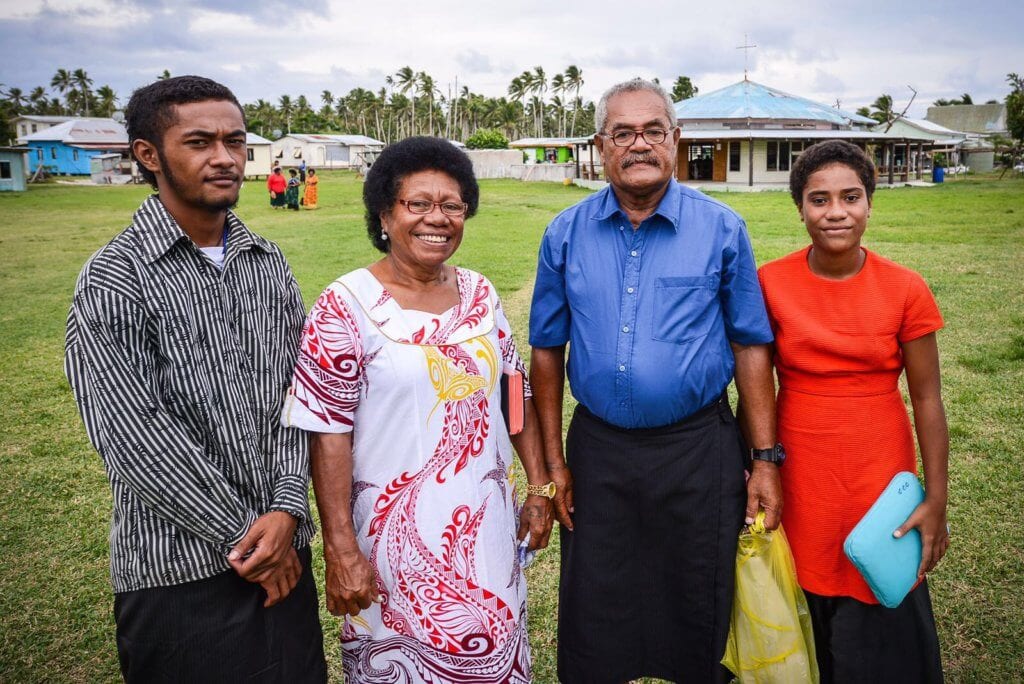 I get served my first bowl, where I am instructed to clap my hands and say BULA! (Fijian for hello) Everyone in the circle roars back at me, “BULA!” I say thank you and put the carved out, coconut shell bowl to my lips and drink. I was expecting worse. It’s not that bad, kinda spicy, kinda sandy. I give the cup back to the guy that served me and everyone says “MATHA!” Then my gums go numb a minute later. Then it’s Chad's turn, then Bee, and its goes round and round until you tap out basically. I wonder exactly how much sand I have drunk now, at least 50 grams? I don’t know. My gums are properly numb and I need to pee. I've had at least 8 bowls of grog now and going against my better knowledge, I have a few more. I’m told this stuff helps you sleep well. I excuse myself and go pee in a bush near the beach. I return to the circle, say good night, basically get told by the local's I’m a soft-cock for not drinking at least 10 bowls more of muddy water. I head for my tent and curl up and drift off into a sleep that I have never experienced before.